I’ve been on a bit of a diet of late, but if I weren’t, I would be really, really happy if my UPS or FedEx guy buzzed with any of these chocolate desserts in hand for me. (Is it any wonder I need to cut back my calories?) Let’s discuss the best chocolate desserts to order online.

No, I’ve not been satisfying cravings by fantasizing over photographs. In an effort to be more frugal (how conscientious, saving calories and dollars), I was clicking through to some online coupon sites for promo codes and was distracted by a free shipping offer for Harry & David on Frugga. (While you can order some crazy amazing food online, sometimes shipping can be pricey.)

It turns out Harry & David is so much more than fruit. They’ll ship you full-on Cheesecake Factory confections. Or just go with chocolate covered strawberries, Hailing from New York I’m a longtime fan of Dean & Deluca which not only has delicious food, but gorgeous presentation. Chocolate and salted caramel layer cake anyone? If your mom’s palette is stuck in tweendom, go for chocolate covered Oreos from Neiman Marcus.

I also recommend the honey sweetened, chocolate dipped marshmallows from Boston maker Apotheker’s Kitchen, which I discovered at the Eat Boutique holiday pop up. And let’s not forget another Boston area favorite, Dancing Deer. (Remember when they invited me on a factory tour?) I often send my own mother Dancing Deer brownie snacks.

One of the best gifts I get during the holidays are the chocolate covered pretzels and chocolate covered graham crackers that Matouk sends as a thank you. But I can’t remember where they come from. (Note to self: Find out!)

Here are 7 of the best chocolate desserts to order online for Mother’s Day, or any time really. 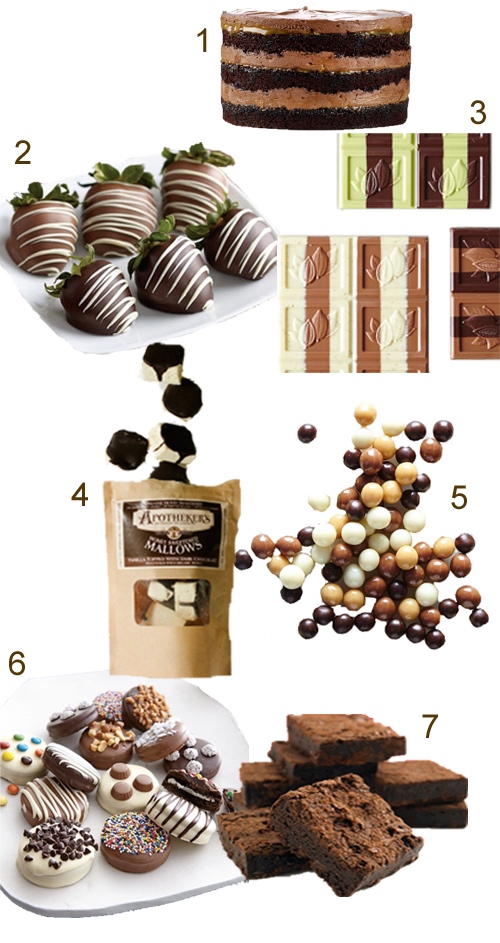 I have a friend who is obsessed with these stretchy fleece personalized baby blankets by Admiral Road. She gives them as baby gifts to almost everyone. (Personalized baby gifts are the best; my son still has the red fleece baby blanket with his name and birthdate received at his bris.) She likes them so much she’s started working with the company (very small and based in Canada) to help them spread the word.

And that’s how I ended up with a personalized baby blanket from Admiral Road. As cute as they are (and they are totally cute and cuddly), I decided my now teenage sons were a tad too big for a new fleece baby blanket. So I ordered one for another friend’s daughter, Daisy. 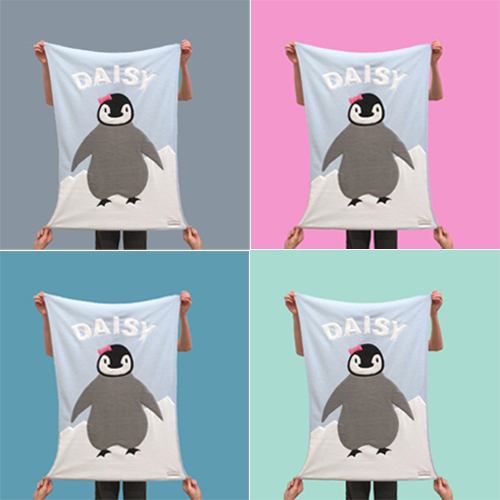 Turns out, when I asked them to hold the corner of the baby blanket for this photo, one of them requested a blanket for himself. Of course. 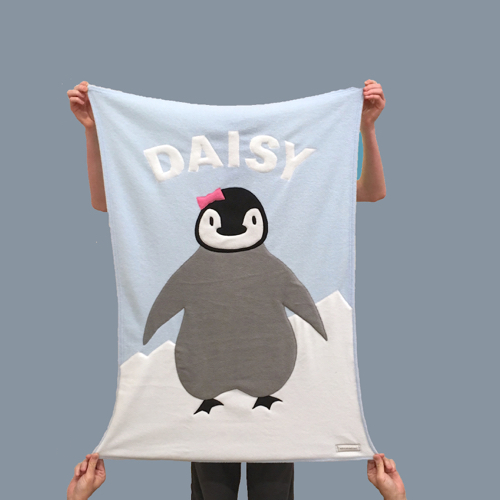 Daisy’s fleece penguin baby blanket is so cute. Hopefully I will see her mom soon so I can give it to her!

Here are half a dozen more personalized baby gifts for you from StyleCarrot partners and others, in case anyone you know is having a baby. It seems like half the people on my Facebook feed are new moms. 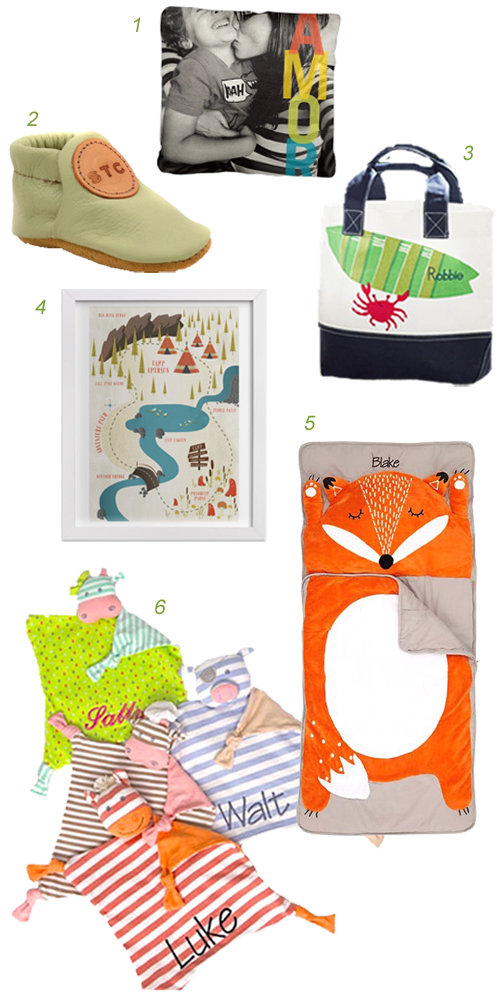 For my second installment of my partnership with World Market, the go-to, on trend, affordable furniture & accessories site, I’ve pulled together 10 goodies for guys who like their alcohol.

As I’ve mentioned before (numerous times in fact), I always think about setting up a bar for my husband, who is definitely a drink-loving dad. When he looks at real estate, the big draw after a garage is a butler’s pantry. The poor urban-dwelling dude doesn’t have a parking space or a bar cart.

Here is a cocktail-themed Father’s Day Gift Guide for dads who drink, with a reclaimed wood bar cart, mixers, copper mule mug, light-up letters, and even a sake-making kit. You know what could be cute too? A homemade cocktail recipe book. Get the kids on it ASAP. 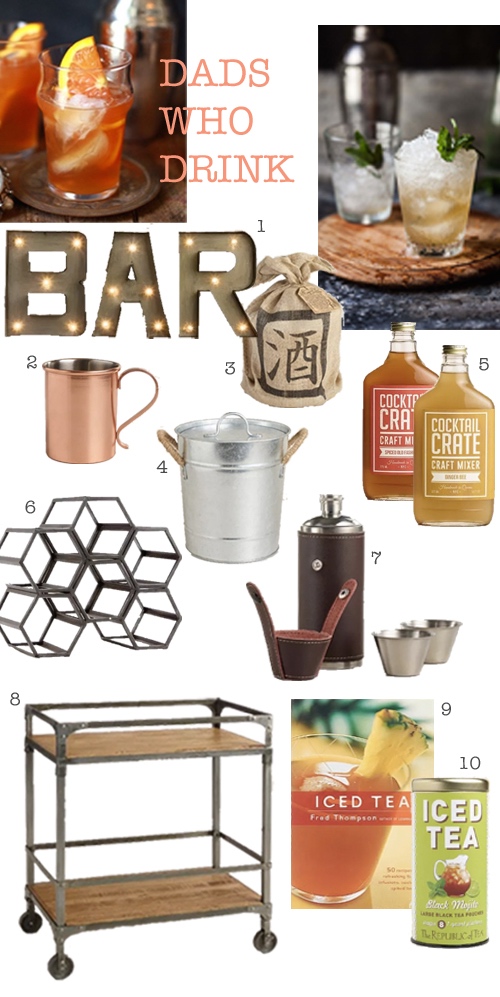 Gift Guide: 25 Last Minute Gifts You Can Get At the Mall

It’s two days before Christmas. Are you panicking over last minute holiday gifts? We celebrate Chanukah in our home, so not only am I finished buying, we’re just about through with our eight nights of giving. If you do the whole Christmas celebration thing, you’re probably required to come up with a whole slew of presents for friends and family. It’s now officially too late to order online unless you’re willing to pay exorbitant overnight shipping costs, and even then, it’s risky. So, off to the mall it is. Here are 25 last minute holiday gifts you can pick up at the mall and/or the free-standing chain stores in town. 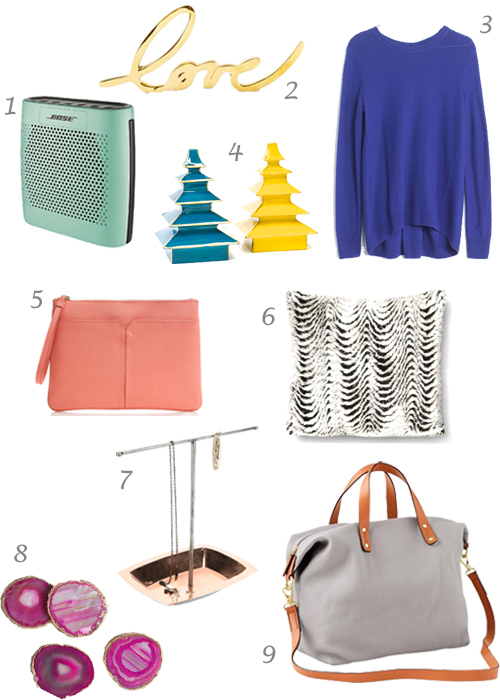 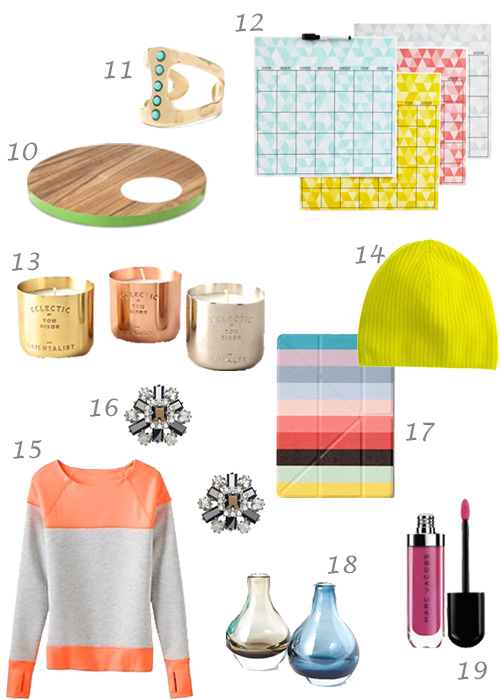 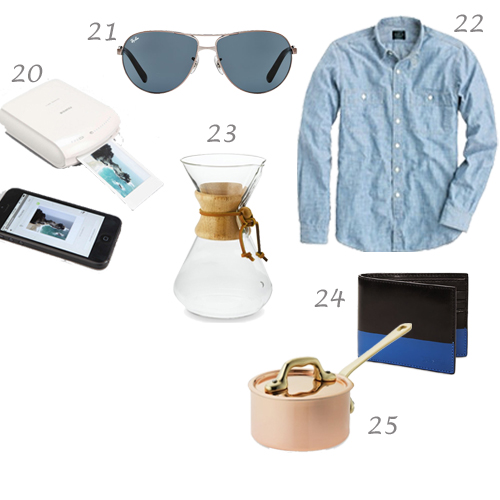 Get the Look: 22 Men’s Watches

We seem to go through a lot of watches at our house. I still have my prized Cartier (thank goodness; I’d be crushed if I lost it…too expensive to replace), but oftentimes, especially in summer, I just like to throw on a Timex with a stretchy metal elastic bracelet. (I wear it to the movies too; Indiglo rocks.) Unfortunately, the batteries don’t last very long. At least mine don’t. I’ve taken to treating them as disposable, which is of course ridiculous.

My husband also favors a Timex. For him it’s a plain white face with black numbers and black (imitation?) leather strap. I’ve tried to buy him nicer watches, but he protests. I think I did finally get him to wear a similar style, slightly upgraded, but he does so begrudgingly. He loses them, which I don’t really get since he’s generally pretty organized. But whatever, not my problem. My son loses his watches too, which is my problem, but he just bought himself an expensive Swatch, so we’ll see.

I love wandering through watch stores, whether its Tourneau in Boston, Cartier in New York, or Wempe in London. (Admittedly, if there’s also jewelry I tend to get sidetracked by the diamonds.)

I did a roundup of 15 stainless steel watches for women in March, but with Father’s Day upon us, I thought it would be a good time to pull together a variety of men’s watches too. As with Mother’s Day, we don’t really observe Father’s Day either. (We’re equal opportunity holiday ignorers.) I kind of ignored my husband’s birthday this year too, which I wasn’t all that nice (but he didn’t want to go anywhere, do anything, or want anything), so he deserves some recognition. Obviously, not a watch.

Here are 22 men’s watches, from sporty to sleek from StyleCarrot partners. 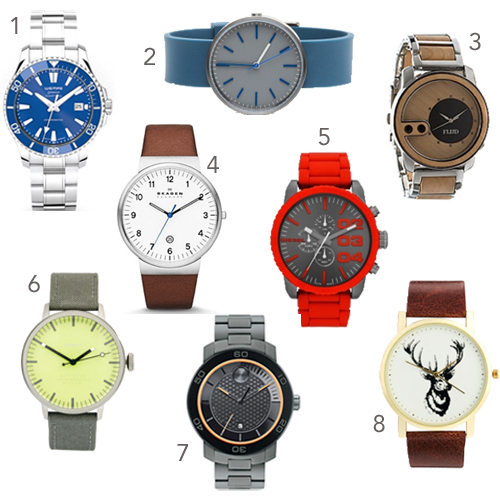 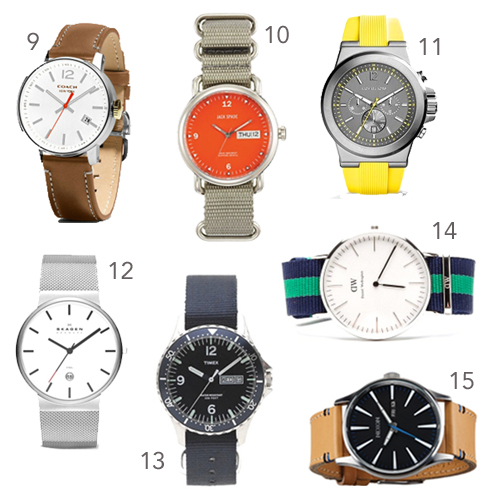 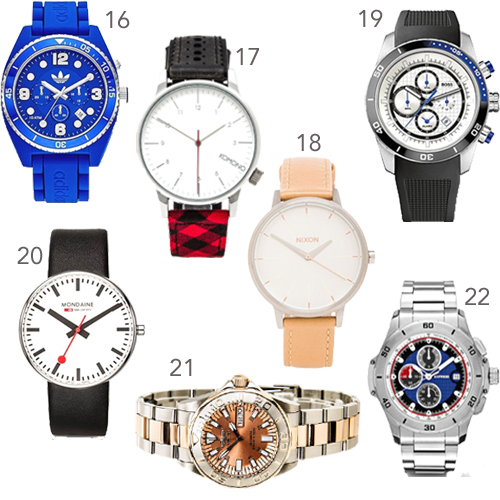