For last year’s Boston Globe Magazine Kitchens & Baths issue, I profiled one of the more interesting projects I’ve researched—a condo for which the starting point was the homeowners’ wine collection. Designed by Thomas White of  ACTWO Architects and built by Merz Construction, this 2,100-square-foot three bedroom in a high-rise overlooking Boston Common obviously did not come with a wine cellar. Here’s a detailed look, photographed by Greg Premru. 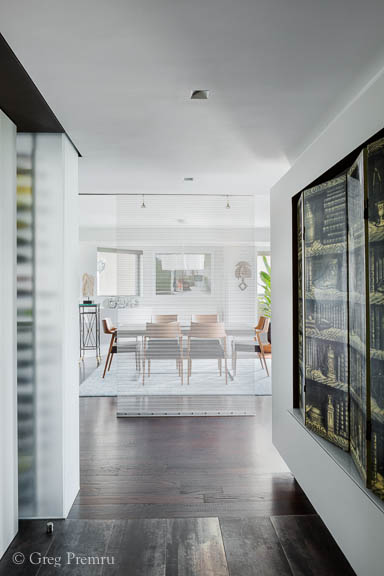 The entry area is defined by the same tile used in the kitchen, a ceramic tile by Tau that resembles Corten steel. To the right, interior designer Manuel de Santaren, whom the couple had worked with on prior projects, suggested cutting a five-inch deep niche for their Fornasetti screen, which was purchased by the husband’s mother in the 1950s. To the left is the hallway with the wine. Straight ahead is the dining area, partially concealed by a fixed metal screen.

The “Athos” dining table by B&B Italia are from Montage in Boston. The “Lirica” chairs by Domitalia are from Italian Interiors in Watertown. The Light blue wool rug with gold silk pattern is from Landry & Arcari in Boston. The light fixture is the Artemide Triple Linear Logico Classical. 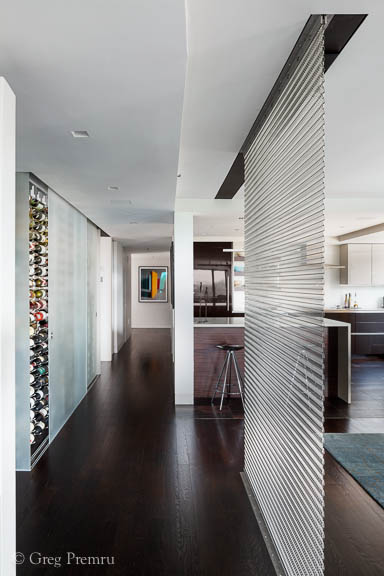 Wanting a textured, transparent material other than glass, White devised a curtain of stainless steel rings that’s normally used in commercial applications, like cladding on airport facades. He brought in Jonathan Merz of Merz Construction early in the process, and they collaborated on the installation, using stainless parts they had had specially fabricated.

The photograph at the end of the hallway, by Victor Schragar, pictures books in varying stages of focus, wrapped in paper to resemble color fields. The couple purchased it from the Bernard Toale Gallery in the South End. They refinished the existing oak floor in medium brown. 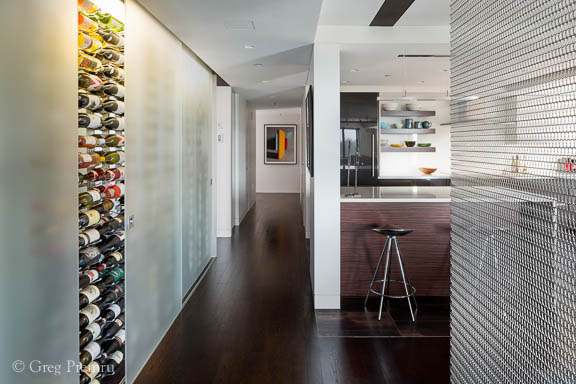 The homeowner wanted to be sure that displaying the didn’t come off as ostentatious, or look like a bar at a trendy restaurant. White offered this wine storage solution: an illuminated wall of wine with floor-to-ceiling glass sliding doors that could accommodate almost 30 cases of wine. It became the starting point for the overall design of the home, and its focal point.

After experimenting with costly custom ideas for what would hold the wine bottles, they chose an off-the-shelf metal rack that the homeowner found online. 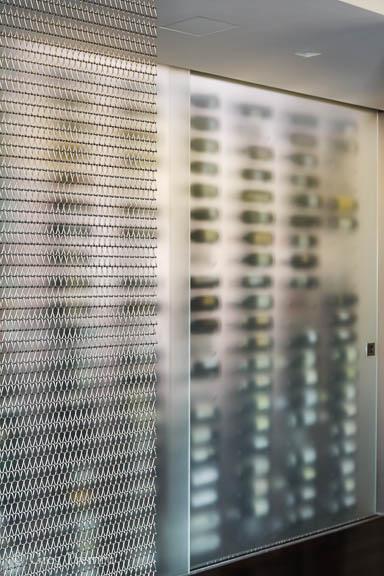 White says, “We realized that illuminating the bottles could be artistic, and decided to make a whole wall glow.”  When the doors are rolled shut, it’s not obvious what’s behind there. The homeowner says that it takes a while before people realize it’s wine. As for the mesh screen, he says, ‘“At night, light skims down the screen, transforming it into a sparkly wall.”

Lighting is at the top, behind a white pre-finished aluminum panel. There’s also a small exhaust fan that ventilates the heat that builds up from the lights. They took great pains to hide the ventilation, ducts, lighting, etc. and to be sure there were no unsightly shadows. Handles are stainless steel inset in the glass.

Standing in the kitchen, looking towards the entry. Waterfall countertop is a buttermilk shade of Caesarstone. 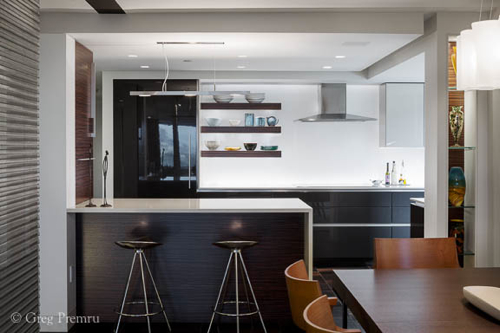 Since it’s visible from the entire home, they wanted to create a sleek kitchen that didn’t necessarily look like a kitchen. They chose white laminate glass for the backsplash, adding LED lighting behind it, so at night it would glow like the wine cabinet. Merz handled the tricky technical end of all that. The homeowners got the idea for floating shelves above the counter from the SieMatic showroom, where they purchased the cabinetry. 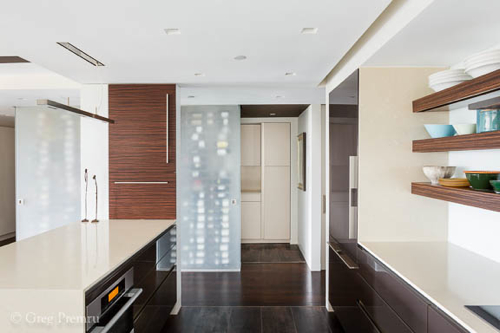 View of the wine cabinet, and the pantry beyond. The pantry houses an extra oven, microwave, and extra storage for dishware. 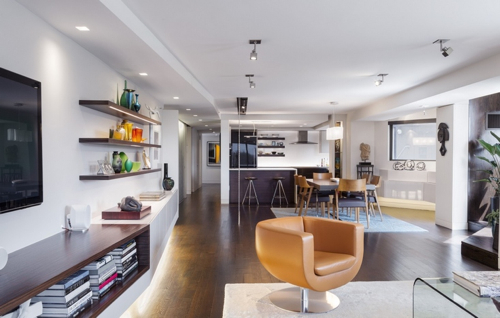 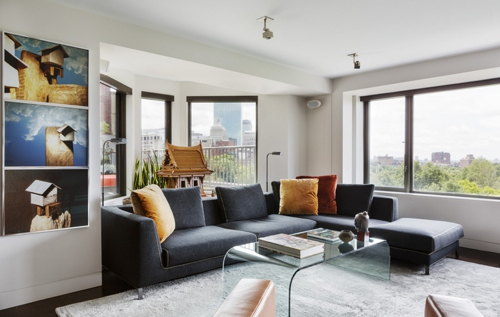 The condo has a great city view, overlooking the Boston Common. 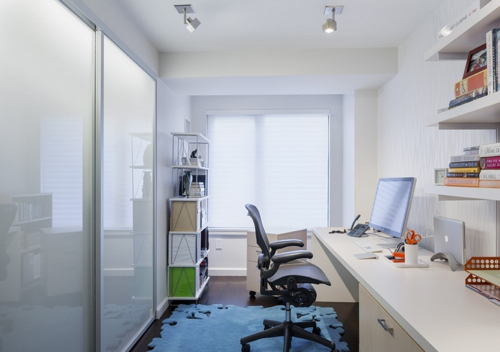 Since the homeowners are empty nesters, the two other bedrooms are his and hers offices, which also function as guest rooms. 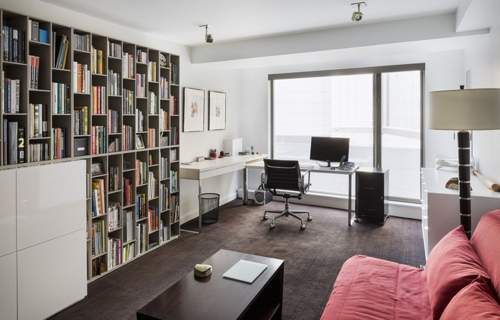 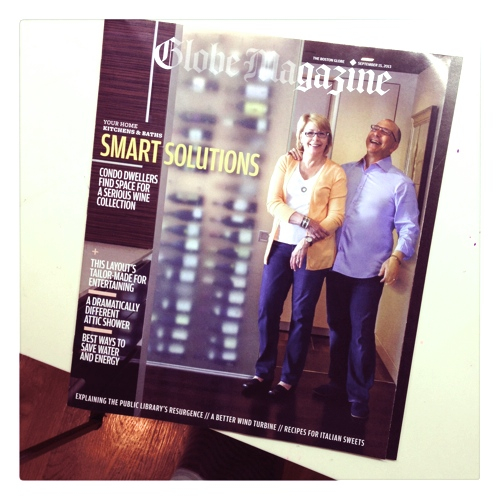 The homeowners on the cover of the 2013 Globe Magazine Kitchens & Baths issue.
Read more about them and the project in my article “Beauty and the Bottle.“