Last May I met Martyn Lawrence Bullard at the Boston Design Center, where he was promoting his new fabric line for Schumacher (I blogged about it here.) In addition to another fabric collection for Schumacher, he has a new tile collection for Ann Sacks. Swatches from both collections, below. 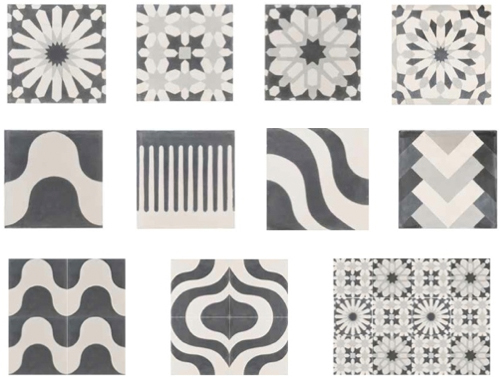 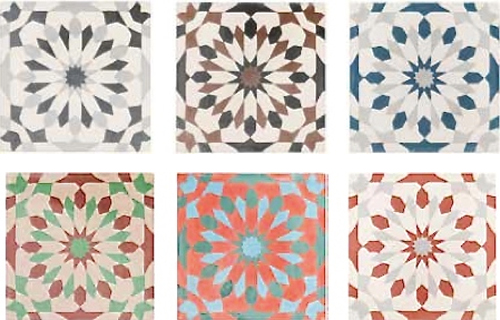 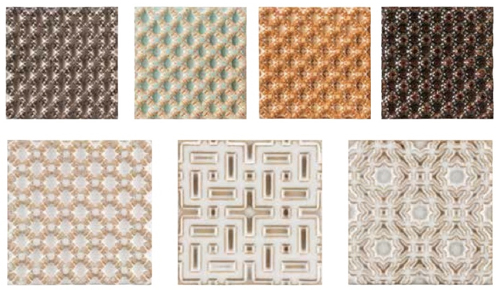 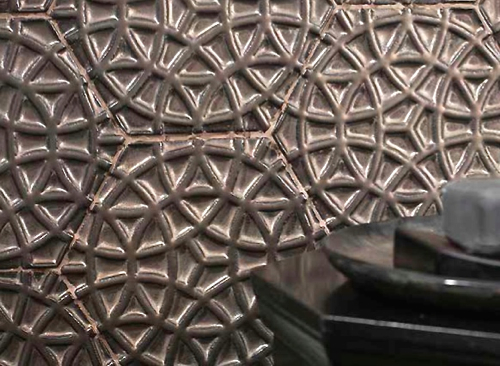 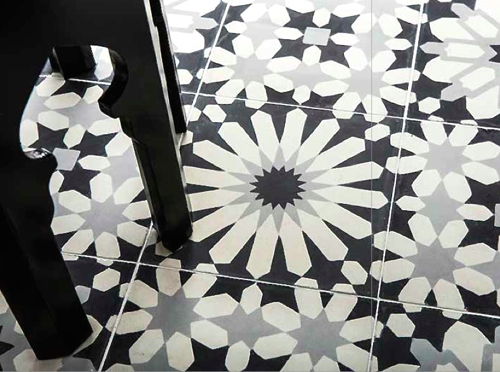 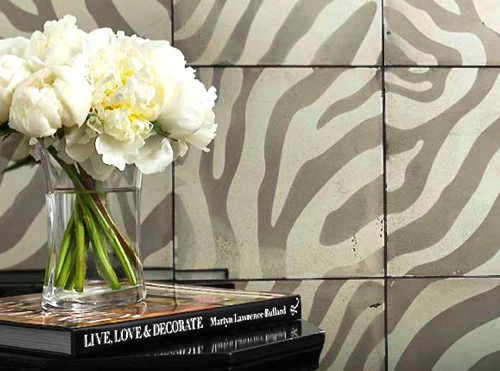 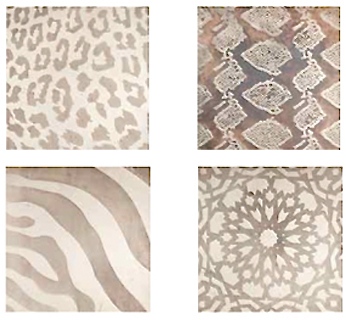 I wrote about this the 1,600-square-foot, contemporary Back Bay condo, decorated by Boston area interior designer Ana Donohue, for New England Home in the article “Urban Oasis.”  Boston photographer Michael J. Lee took all the photos.

The homeowners, who live in Bermuda, purchased the two-bedroom as a pied-a-terre so they’d have somewhere to stay while visiting their two daughters, who attend boarding school in New England. Ana was recommended by a friend, and worked with the wife to create a contemporary home-away-from-home that has a similar feel to the family’s Bermuda residence. 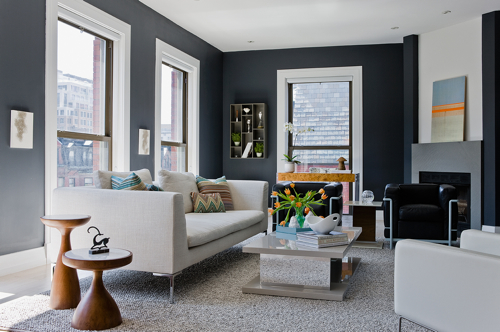 The walls were already this deep charcoal, and since there’s tons of light, they decided to leave it. Plus, dark walls would provide a dramatic backdrop for the light-colored B&B Italia Charles sofa by Antonio Citterio and Cassina LC2 armchairs, purchased at Montage.  The mirrored cocktail table is from The Morson Collection. Newton-based art consultant Jacqueline Becker chose artwork throughout. 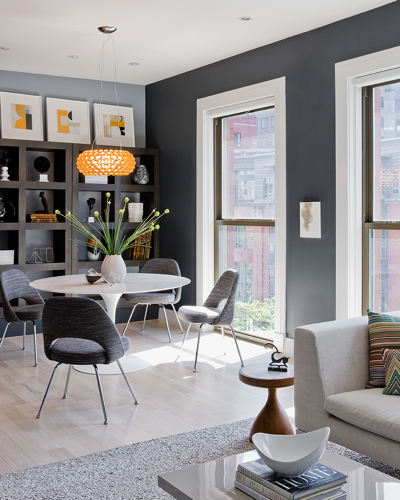 The floors, however, were a different story. Stained a rich walnut, the homeowner wanted them lightened. The contractor thought they were crazy, but embarked on a long bleaching process that left the floors a lovely, creamy shade of white. Everyone loves them. 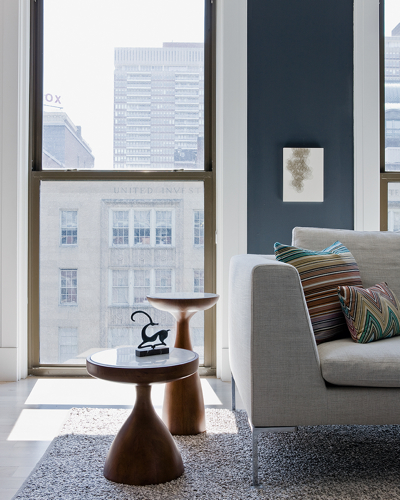 Donohue chose a silvery rug from nearby Landry & Arcari to keep to a uniform palette. The homeowner told me, ““I didn’t want a Persian rug, or a busy print; it would make too much of a statement.” She also preferred to leave the windows bare. Donohue added color and pattern with Missoni throw pillows. Donohue chose a pair of alabaster-topped turned walnut  Jonathan Adler Buenos Aires side tables in different sizes. 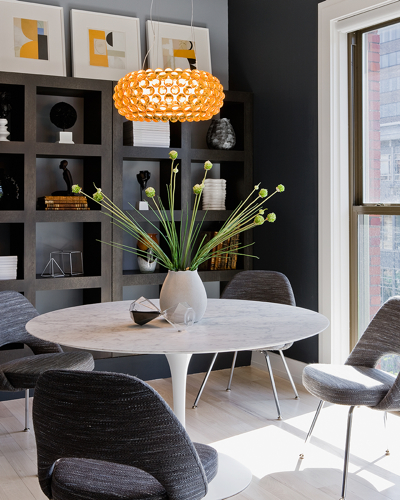 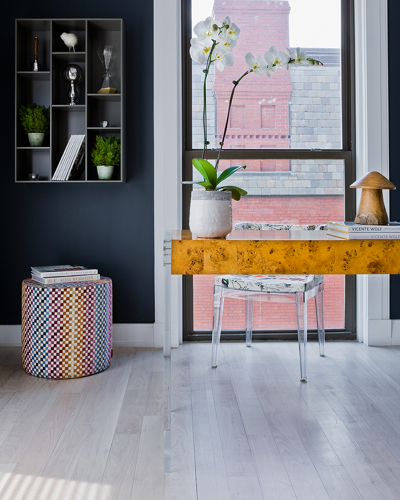 A Jonathan Adler Bond desk is in front of a window; the Lucite legs makes the burled mappa wood top appear to float. Behind it, barely visible, is an Kartell Mademoiselle chair, also with Lucite legs. 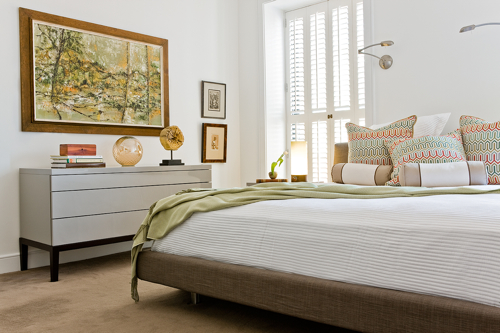 The upholstered bed in the master bedroom is from DWR and the sleek dresser from Italian Design in Brookline. Bedding from Bloomingdale’s. 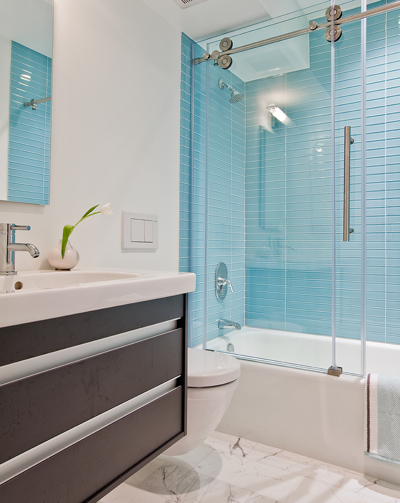 Stacked horizontal tile in robin’s egg blue is from Ann Sacks, and the contemporary walnut vanity and faucet from Billie Brenner in the Boston Design Center. 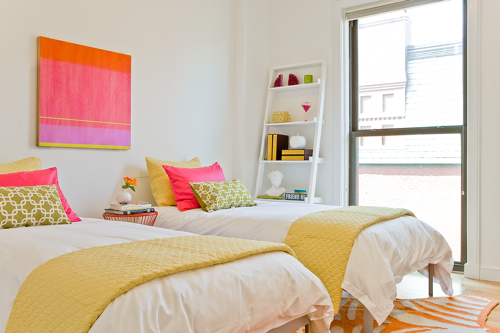 The girls wanted fun colors in their bedroom. Ana found a brightly colored wire side table and bedding at Home Goods. The Jonathan Adler zebra rug in orange adds pattern.

If you read my last post, you know that Sunday’s edition of the Boston Globe Magazine featured “Living Brilliantly”, the piece I wrote about a Nantucket house with interiors by Frank Roop .I know I promised Part II of this dreamy spot yesterday, but life (well, kids home on summer vacation) got in the way. Three doctor’s appointments, a teacher conference, a trip to the playground, two playdates, a four hour hair appointment (hey, straight hair takes time) and a massive Target trip later, here’s the other half!

Photography by Eric Roth – Courtesy of The Boston Globe 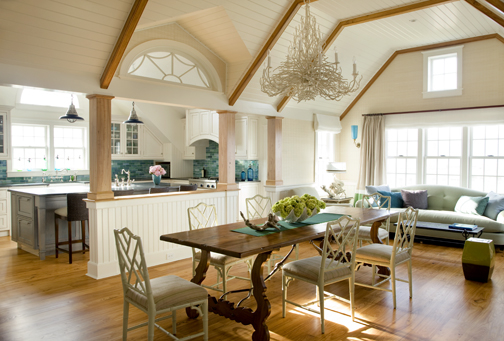 Don’t you love the chandelier? It’s a very heavy commercial piece, probably from a restaurant, from the 1960s. It resembles of mass of tangled twigs, or maybe coral. Roop calls its look “a nod to the ocean without being corny.” The antique table came from a Paris flea market. The homeowners bought it on a trip years ago, and had been storing until they had the space for it. Roop added the vintage faux bamboo chairs that he had lacquered in celery green (I know, they look white here) and reupholstered. Roop filled a huge clamshell he found in the basement with hydrangea for the shoot. 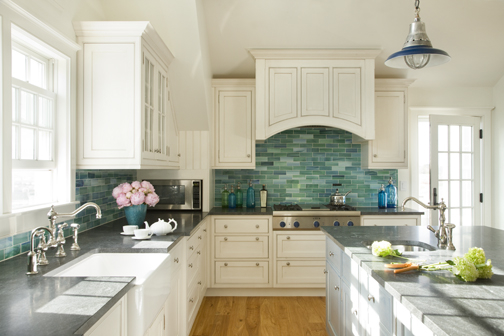 The perfect kitchen. The sea colored glass tiles are divine. Roop ordered them in an array of custom color arrangement from Ann Sacks. They make a perfect backdrop for the wife’s collection of green and blue seltzer bottles, which she’d been collecting over the years and acquired mostly in Paris and at Brimfield. She says, “I have a bunch of them; some have old wicker around them. They’re antique and very heavy. I love them; I have been hoarding them for Nantucket.”

The cabinetry is from Dalia Kitchen Design in the Boston Design Center. You can’t tell here, but the base of the island is stained a light blue color to break it up and bring in more color. The cooktop is Thermidor, with cobalt blue knobs, similar in color to the vintage Greek fisherman pendants that were acquired by Roop through a dealer. The countertop is jet mist honed granite from Gerrity Stone in Woburn, Mass. (a popular source around here). They wanted a honed stone because they felt is was less formal than a polished stone, and it also created a soapstone look without the fragility. (Soapstone is pourous and stains easily. 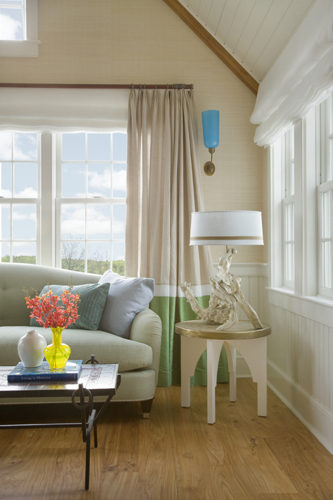 sitting room off the dining room

This is the room you see in the background in the dining room shot above. How great is that 1950s driftwood lamp? Of course, Roop added a new shade, white linen, I think, trimmed in khaki grosgrain ribbon. Even better are teh 1820s blue opaline glass sconces from England. Love, love, love. Roop designed the side table, using a Moorish shaped-base to continue the exotic accents theme. The top is bronze, with a Moroccan pattern stamped on it. The coffee table is by French Modernist Jacques Adnet. It has a tile top in its iron base. (You can find some similar pieces by Jacques Adnet on 1st Dibs.) And, by now you’ll recognize Roop’s signature drapes. These are made from green silk that looks like linen (imported from Thailand), white linen and khaki linen. I’m thinking of trying this look in my Back Bay bay living room bay windows. 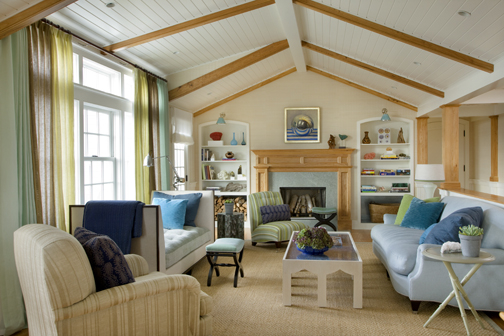 Let’s start with the rug. Like pretty much everywhere else in the house, the living room rug is sisal. The family has two dogs (a chocolate lab and a mutt) and three cats, so they needed a pet friendly solution. The husband wanted Oriental rugs. The wife said no way. She had some rag rugs. Roop was less than charmed. So the sisal was a practical compromise. (The husband got an Oriental in his office.)

The fireplace surround is Costa Esmerelda, which is a pale green granite from Brazil. Roop designed the niche bookcases, above which are mounted sconces with sky blue pleated silk shades. Roop designed the coffee table. The open detail Moorish shape was inspired by a Robsjohn Gibbons stool he has. The top is inlaid paoa shell imported from Hawaii, which is a super shiny and lustrous veneer that Roop uses whenever he can. He has a star-shaped table covered in it in his design studio, and when the wife saw it, she insisted on his designing a piece using paoa shell for the Nantucket house. The finish is unique and gorgeous. The side table in the foreground is vintage faux bamboo. Roop designed the X-stools as well; they’re covered in a green silk canvas by Jim Thompson. The drapes are custom, but this time vertical panels are stitched together rather than horizontal swathes of color. They’re linen, with some shine, in three different colors.

Roop also designed all the upholstered pieces. (The sofa and chair were actually prototypes.) Roop uses McLaughlin Upholstering Company in Everett, Mass. to make them. The sofa fabric is a very heavy grayish blue linen, and the chairs are in a linen awning stripe. The daybed is upholstered in linen too, with a linen velvet cushion in a bluish green. Roop loves to do a contrasting cushion on a daybed, so it almost looks like a mattress. He cleverly used a daybed in front of the window because a sofa with a back would have blocked the view. The husband wasn’t crazy about the idea of seating sans back, but it’s the wife’s favorite seat in the house. She says,  “I love to sit there with a cup of tea and look out at the sky with the sun shining in on me; I can see the water in the distance, I love that seat, it is my favorite place.” 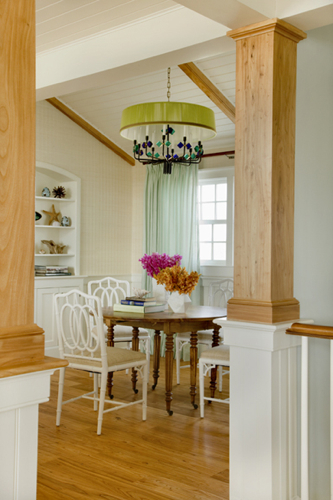 This is a little room off the living room where the family does puzzles. Their old house did not have a television, so they did a lot of puzzles, and wanted to be sure to fit in a dedicated round table for puzzles here. The table was found by the homeowners in a Paris flea market. The chandelier is thoroughly amazing. It’s funky Danish piece from the ’60s that Roop got from a dealer in New York City. It’s iron, embellished with handmade glass tiles. The wife adored it immediately, but both she and Roop were certain that neither the architect or her husband would like it. Surprise! They both loved it. Roop designed the chartreuse shade, which is made out of at least 100 yards of cotton cording, and trimmed in suede around the bottom edge. 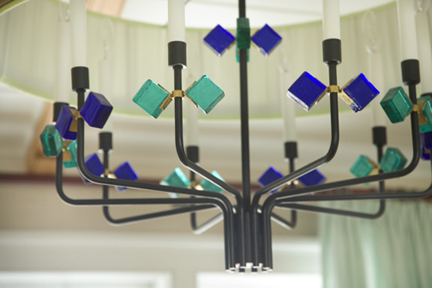 Last week I illuminated how black & white made its way from the runway into the home. Another trend I highlighted in that article – “Fashion In the House” for the Boston Globe Sunday Magazine – was rocks and minerals. While jewelry and fashion designers are reveling in rough and chunky stones, interior designers are finding ways to bedeck rooms with earthy gems.

Let’s start with a peek at the Spring ‘o9 shows, where Burberry Prorsum, Marc Jacobs, and Roberto Cavalli were just a few of the designers rockin’ out.

How is this being translated on the home front? Here’s a gorgeous tableau of home accessories from Good, an exquisite boutique in Beacon Hill, Boston. 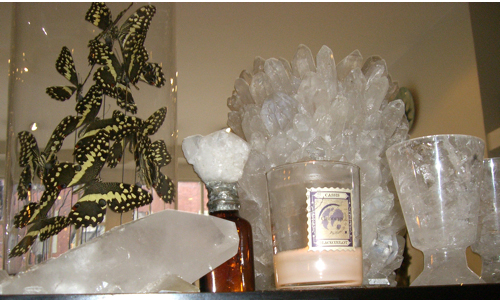 I’ve noticed a number of designers incorporating hefty hunks of shimmering, fantastical mineral specimens into interiors. They’re often pricey pieces, but quite magical. (And, a much more interesting and sophisticated take on the preppy Palm Beach coral display.) Boston-based interior designer Frank Roop has a number of beautiful minerals and chunky glass pieces scattered throughout his studio and condo. Home furnishing designers are crafting lamp bases from minerals. I’ve also noticed textile manufacturers getting in on the action, be it with granite-textured wall covering, or stone-like cut velvets.

I love the mineral specimens, and I absolutely adore the jewelry. I’ve put together some translations… 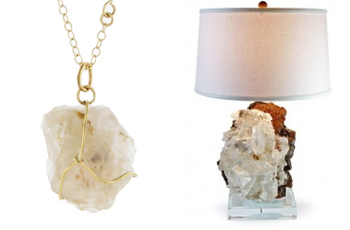 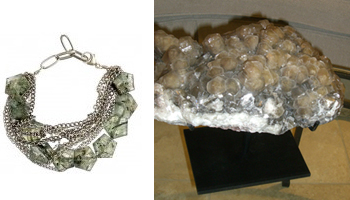 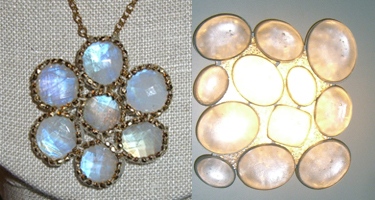 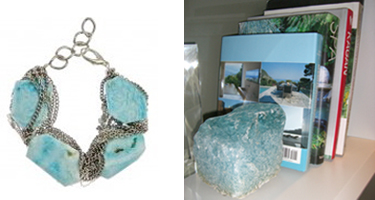 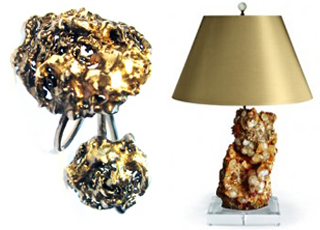 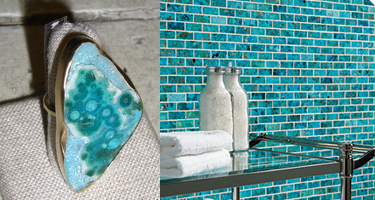 Finally, here is a piece I picked up on ebay last night. Can’t wait for it to arrive! 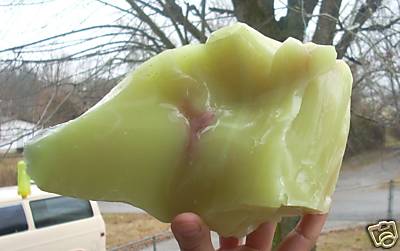 Filed under . REGULAR FEATURES, On Trend