I profiled the bedroom makeover of local teen influencer Alexa Curtis in the January 29th issue of the Boston Globe Magazine.

Curtis, who’s 19 and writes the affordable-lifestyle blog A Life in the Fashion Lane, came to her 500-square-foot North End one-bedroom apartment basically empty-handed, save for clothing and photos. Luckily she met designer Jenna-Lyn Croteau at the South End Open Market, who agreed to take on the project for a budget of less than $1,000.

Croteau, who’s 22, is a student at Boston Architectural College and the founder of the furniture restoration and design firm, Recycle Refinish Reuse. (She also assists the fabulously talented Alina Wolhardt of Wolf In Sheep Design, who just designed the new Flour Bakery.)

Jenna created Alexa’s white and gold look with a little money, lots of DIY finesse, and a handful of freebies Alexa was able to score in exchange for exposure on her blog. 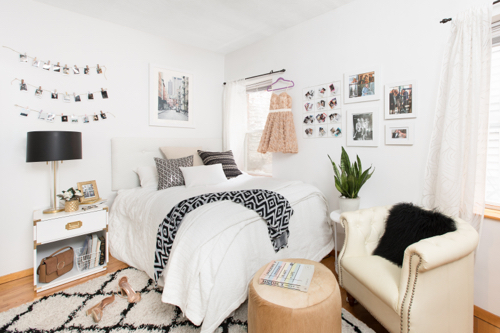 Photo by Samara Vise for the Boston Globe

Alexa loves to display photos of her friends. Jenna clipped Polaroids of Alexa’s travels around Europe, including the Cannes Film Festival, to three rows of linen string above the campaign style nightstand. There are more snapshots tucked into a holder on the other wall, next to four enlarged photos in frames bought on clearance from HomeGoods that Jenna painted white. The Soho cityscape above the bed is from Minted, by Austin-based photographer Kaitlin Rebesco.

Jenna transformed aa 50-cent vase from the Salvation Army with gold spray paint. Croteau made a wall-hung headboard from plywood, foam, and quilted fabric. She even made the covered buttons. She has her own table saw, jigsaw, sander, and drill in her home workshop.

Ethan Allen supplied the bedding and throw pillows. (White bedding was a must since Alexa use the bed as a background for photographing outfits.) The diamond-pattern throw is from Walmart, and the Moroccan-style rug from Wayfair.

The tufted leatherette chair with nailhead trim was a splurge that Jenna found on Craigslist for $100; definitely their biggest purchase. Room & Board provided the black sheepskin pillow. The curtains are from Ikea; the rods were already there when Alexa moved in. 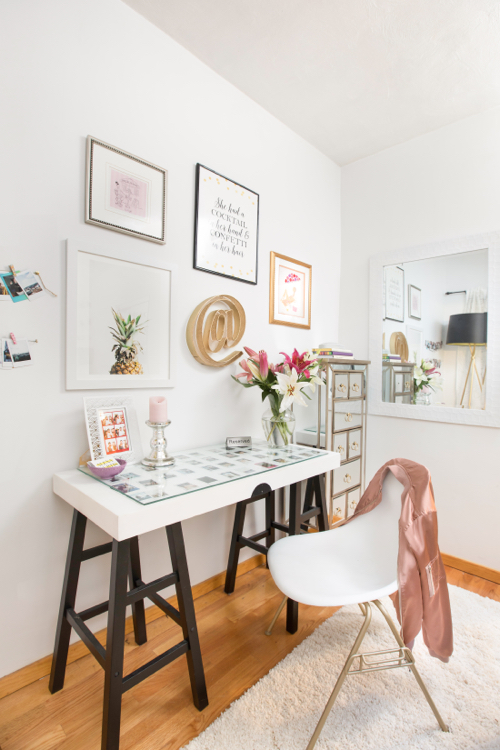 Photo by Samara Vise for the Boston Globe

Jenna set up Alexa’s workspace on the other side of the bedroom. Responding to one of Alexa’s inspiration photos, Jenna made the desk by placing the top of an old trunk on the legs from two stools. A piece of found glass lets Curtis display snapshots underneath.

The Herman Miller fiberglass desk chair was a roadside find that was orange and very scratched up until Alexa primed and spray painted the seat white and the legs gold.

Jenna spotted the sparkly gold @ symbol at T.J.Maxx, which became the starting point for the art wall, which includes a print from Alexa’s dad and a pineapple print from Minted.

Alexa purchased the tall, mirrored chest from Overstock. Jenna revamped the dark metal honeycomb frame of an $8 mirror from the Salvation Army with white paint.